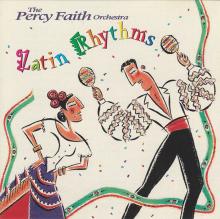 Percy lived his first thirty-two years in Toronto, Canada, where the winters graced the people with snows so deep that the snow shovels were kept inside the house, as this was the only way to burrow out. Thus the often asked questions: “How did he come by his affinity for Latin music?... How did the warm, stirring sounds of Mexico, Spain, Cuba and Brazil find their way into his head?”

Until the advent of television in the late 1940’s, radio was the chief source of entertainment in the home. Included in radio’s musical offerings were Latin bands such as Xavier Cugat and Enrique Madriguera. These and others also appeared in films in the 1940’s and ‘50s, and in nightclubs. Percy heard them all and was inspired by the musical sounds and rhythms. This could explain the source of his love for the music, but the affinity?... This could only have come from a higher source.

Even today, many of the arrangements with which Percy has been identified were originally created for his many radio shows in the 1930’s and ‘40s which he subsequently recorded. Included in this all digital re-recording are three examples of these timeless melodies: “Tico Tico” from Fiesta Time (Decca 1948); “My Shawl” from Fascinating Rhythms (Columbia 1950) and “Oye Negra” from Delicado (Columbia about 1955).

Three other melodies in this new recording are “Granada,” “Chiapanecas” and “Mexican Hat Dance” from Viva, the music of Mexico released on Columbia about 1958. This album earned Percy a gold record award and due to its enthusiastic reception, he later recorded Mucho Gusto, more music of Mexico, released by Columbia about 1961. On a visit to Mexico City, Percy was given the Key to the City by the mayor of Mexico City, in appreciation of his contribution to the music of the country.

Percy’s repertoire of Latin music is vast, and could fill many more recordings. Did he have special favorites? We could presume that they would be the ones he created during his early days in radio, and continued to use in recordings and concerts throughout his career.

Percy Faith borrowed these wonderful Latin melodies from their composers and dressed them in the bright colors of excitement, romance, humor and majesty, all done with the consummate perfection we have come to know so well.

Nick Perito and forty seven musicians have done a superb job of replicating sixteen of Percy’s greatest Latin arrangements for this package. Percy would be proud to hear his music so respectfully executed, upholding the quality of rich strings crisp and vibrant brass and exciting percussion that his legacy of music has always provided.